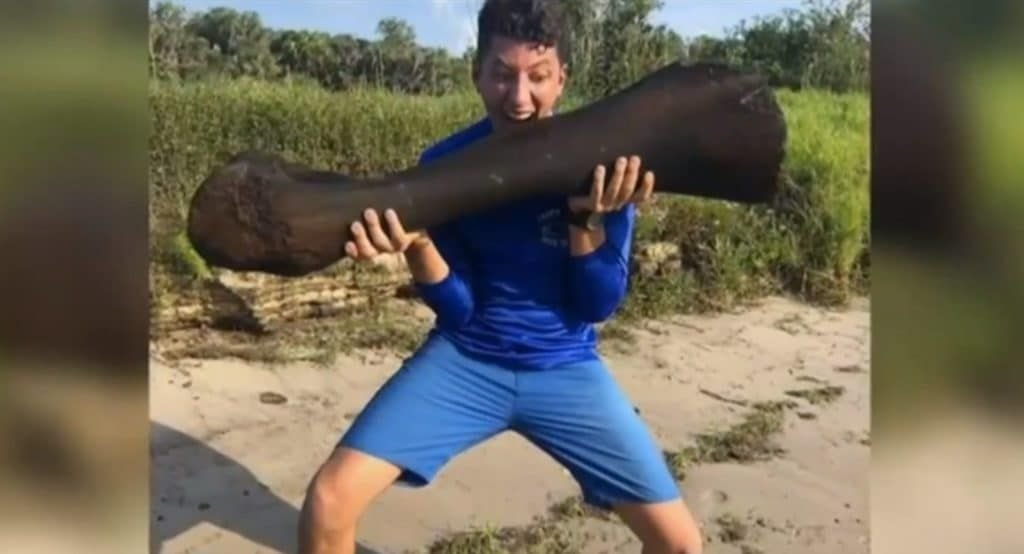 Buried beneath the Peace River: fossil hunting in DeSoto County

The tranquil water of the Peace River recently made national headlines when a fossilized Mammoth bone was pulled from the water.

“Instantly, I knew, I was like ‘Oh my God, I’ve found something awesome!” Henry Sadler said when recalling his experience of discovering the fossil to NBC2 News.

Though finding a giant bone from an animal that lived thousands and thousands of years ago doesn’t happen every day, you might be surprised to hear how often people are finding ancient remains in Florida. Earlier this year, divers pulled two Mammoth tusks out of the Gulf of Mexico, while in January an adult hand-sized Megalodon tooth was uncovered near Venice.

Seeing these discoveries on NBC2 News got me wondering if Mammoth remains and giant shark teeth were the only thing buried beneath our Florida soil. So I reached out to Fred Mazza of Paleo Discoveries, a fossil-hunting tour guide of sorts. Mazza leads groups on adventures into the Peace River near where the most recent Mammoth discovery was made for the sole purpose of finding fossils. He says for a number of reasons, this area is graced with a good supply of signs from the past that can be surprisingly accessible during the dry season.

“Along that river system, which is very old, a lot of mammals came, lived and died in that environment and became preserved in there as well much later after the ocean had receded,” Mazza said. “Because South Florida especially has a really low elevation and has been for a very long time, it’s very much affected by sea-level rise and fall.”

The advance and retreat of the ocean over Florida has left out state with great examples of sedimentary rock. The Peace River works as a natural excavator by exposing things that were buried and fossilized long ago. What helps fossil finders in Florida as well is that fact we don’t have volcanoes and earthquakes here are exceedingly rare. This has left us with well-preserved souvenirs of the ancient past ripe for the picking. But unfortunately for people looking for some of the more classic fossils that come to mind when thinking of the subject, you will not find anything like a toothy T-Rex jaw in the sand anytime soon here in the Sunshine State.

“Florida was completely under the ocean the entire time period that the dinosaurs were alive. So, sadly no dinos here. Although it looks like Jurassic Park, it really isn’t” Massa said.

So in an ironic twist, the same water that kept the big land-based dinosaurs away from what would become Florida helps to uncover them today in our time.

“The Peace River cuts through a sediment layer that those fossils are in, so it just kind of exposes them on the river bottom.” All while keeping a life-long passion for discovery alive in people like Mazza interested in our state’s ancient past.

*Assumes 2.799% APR, 20% down payment, and conforming 30-year fixed rate first mortgage on a single family, primary residence. The monthly payment you enter includes only principal and interest. Additional required amounts such as taxes, insurance, home owner association dues, assessments, mortgage insurance premiums, flood insurance or other such required payments should also be considered. Not all individuals will qualify for a mortgage loan based on the payment entered. Rates cited are for instructional purposes only; current rates are subject to change at any time without notice.  **Posted APR is based on Mortgage Assumptions.
Copyright © 2021 Fidelity Home Group supports Equal Housing Opportunity | All Right Reserved  | NMLS Identifier 1834853. Fidelity Home Group is not affiliated with the Department of Housing and Urban Development (HUD) or the Federal Housing Administration (FHA). Not intended for legal or financial advice, consult your own professionals if such advice is sought. Accessibility Statement  | Consent to Receive Electronic Loan Documents  |  Cookies Policy   |  Disclosures  | Email and Mobile Policy |  Fair Lending Policy  |  Mortgage Assumptions  |  NMLS Consumer Access  |  Privacy Policy  |  Terms of Use
Contact Us
(239) 466-0400
moc.puorgemohytiledif@olleh
Send a Message
Schedule a Call
Schedule an Appointment