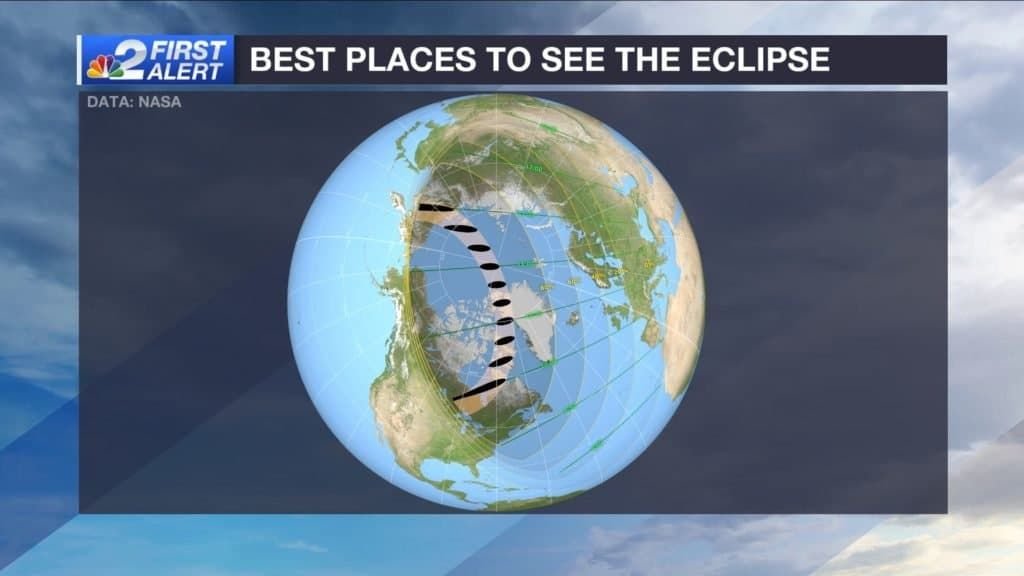 Parts of Earth will be treated to a solar eclipse on Thursday morning. Unfortunately for us Floridians, we won’t be in line to see this one as we live too far south. But, areas of the Northeast US, Great Lakes and swaths of Canada will get to see a piece of the eclipse early on Thursday morning, and it should be a cool show!

Since we’ll be out of the prime viewing region for this solar spectacle, if you want to see it for yourself without taking a last-minute trip north you’ll need to watch it online. NASA has a special livestream of the event you can watch by clicking here.

Thursday’s eclipse has a few names depending on where it will be viewed from.  It’s technically a partial solar eclipse for people in areas like New York City and Boston.  That’s because of the position of the moon, from their perspective it will appear as if a chunk of the sun is missing because of how the moon will be crossing in front of it (looking almost like a cookie appears when a big bite is taken from it).

In parts of Canada though, mainly across northern Ontario, northern Québec, Nunavut and Northwest Territories, the “ring of fire” eclipse show will be visible.  Here, from the Earth’s perspective the moon will move more directly across the sun, giving the appearance of a large black circle with a thin illuminated outline hovering overhead like you see in the image below.

The event these regions will see early on Thursday morning is sometimes referred to as an annular eclipse.  That is a solar eclipse happening when the moon is on the part of its orbit where it’s relatively far away from Earth.  Something to remember with the moon’s orbit is that instead of being a perfect circle like a steering wheel or hula-hoop, the moon has an elliptical orbit in more of an oval shape than a circle shape.  This means the distance the moon is from the Earth varies based on where it happens to be as it orbits our planet.  When the eclipse happens on a point on the orbit where the moon’s far away, it’s not big enough to block out the entire sun.

You can learn more about eclipses from NASA by following this link.

The post How Thursday’s ring of fire eclipse works and where you can watch it appeared first on NBC2 News.

*Assumes 2.799% APR, 20% down payment, and conforming 30-year fixed rate first mortgage on a single family, primary residence. The monthly payment you enter includes only principal and interest. Additional required amounts such as taxes, insurance, home owner association dues, assessments, mortgage insurance premiums, flood insurance or other such required payments should also be considered. Not all individuals will qualify for a mortgage loan based on the payment entered. Rates cited are for instructional purposes only; current rates are subject to change at any time without notice.  **Posted APR is based on Mortgage Assumptions.
Copyright © 2021 Fidelity Home Group supports Equal Housing Opportunity | All Right Reserved  | NMLS Identifier 1834853. Fidelity Home Group is not affiliated with the Department of Housing and Urban Development (HUD) or the Federal Housing Administration (FHA). Not intended for legal or financial advice, consult your own professionals if such advice is sought. Accessibility Statement  | Consent to Receive Electronic Loan Documents  |  Cookies Policy   |  Disclosures  | Email and Mobile Policy |  Fair Lending Policy  |  Mortgage Assumptions  |  NMLS Consumer Access  |  Privacy Policy  |  Terms of Use
Contact Us
(239) 466-0400
Click to Email
Send a Message
Schedule a Call
Schedule an Appointment